Based on information provided by the Wholesale and Specialty Insurance Association (WSIA), the 15 stamping and service offices across the U.S. processed more than $24 billion in surplus lines premium for the first half of 2021. This represents a 21.9 percent increase over premium filed in the first half of 2020. All 15 states reported an increase in reported premium compared with midyear 2020. Total premium rose at a greater percentage than the items processed, which increased 7.2 percent compared with midyear 2020.

Since 2018, surplus lines premium growth reported by the stamping offices in quarters three and four has exceeded premium growth in quarters one and two, and many market leaders see continued opportunity for expansion in the second half of 2021.

States with stamping offices accounted for 62.7 percent of U.S. premium volume in 2019, according to stamping office and AM Best reports, so stamping office reporting provides a valuable indicator of the direction of the surplus lines market overall, said WSIA in its July 19 media release. 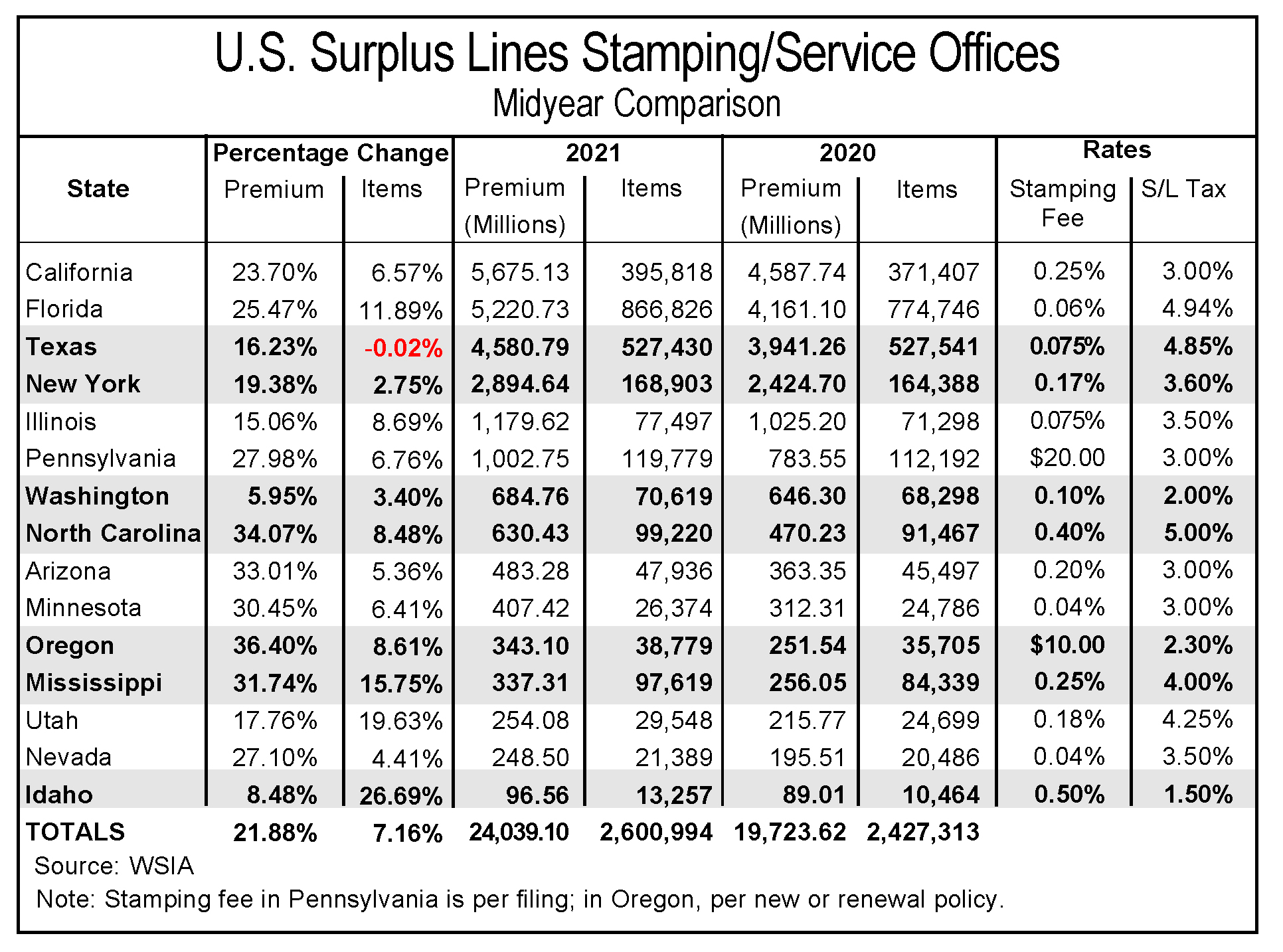 The largest dollar gains were in California and Florida, where increases were greater than $1.0 billion in reported premium. California, which grew by $1.09 billion in premium, or 23.7 percent, remained the highest premium volume state. Second place Florida had $1.06 billion more in premium compared with midyear last year, a 25.47 percent increase.

In contrast to the midyear 2020 and annual 2020 reports, transaction counts increased for the first time since the 2019 report. Idaho reported the highest increase with 13,257 transactions, up 27 percent from 2020.

According to Wendy Tippetts, manager of the Surplus Line Association of Idaho, “Premium growth can be seen in general liability, fire and allied and general contractors. Transactions are up significantly in high limit accident and health. General liability and fire and allied increases are not surprising due to the magnitude of residential and commercial construction. With the influx of people relocating to our beautiful state, new home construction is booming statewide, and property values are following suit.”

Growth was attributed to construction in other western states. According to Scott Wede, executive director of the Surplus Line Association of Arizona, “The double-digit increases come from an overall rate increase on all lines of business. Commercial and residential construction class premiums have increased along with professional classes. Arizona and some neighboring states are in a building boom and the addition of new households reflects increases in all classes.” In other states it was casualty coverages driving the growth in premium volume.

“In Illinois, our property categories have retreated somewhat from their strong gains in 2020. However, we are seeing significant growth in the first half of 2021 for general liability, excess general liability, E&O/D&O, cyber, umbrella, commercial auto physical damage and pollution,” said Surplus Line Association of Illinois CEO David Ocasek. “Strong performance in these categories has contributed to surges in both total premium (15.2 percent) and number of documents filed (8.7 percent), as well as a six percent increase in average premium per filed document.”

New York saw the lowest premium growth of any stamping office state in 2020 but has rebounded significantly in the first half of 2021. Dan Maher, executive director of the Excess Line Association of New York said, “Year over year, as of June 30, the New York excess line market enjoyed substantial premium growth of 18 percent. The increase of nearly $470 million is nearly triple the increase from 2019 to 2020 at midyear. I attribute the difference to the pandemic’s negative impact in 2020.”

North Carolina reported the second highest premium growth of the stamping office states. Geoff Allen, chief operating officer of the North Carolina Surplus Lines Association, said, “North Carolina realized an increase of 34 percent in premium for the first half of 2021. The month of June and the second quarter of 2021 were both records for surplus lines premium filed in North Carolina. Most of the increases were in commercial property, general liability, excess liability, directors and officers and cyber liability. In addition, the total number of filings were up eight percent in 2021 over the same period in 2020.”

These statistics are gathered and reported individually by each state stamping office and the data is aggregated and summarized by WSIA on their behalf.