Twenty years into providing technical assistance to agents through continuing education, agency training, telephone or email questions and answers, and more recently subbing as Ask Regina for the late Regina Anderson, Jim Gavin, 70, is retiring from the Independent Insurance Agents of Texas on June 30. The wealth of information he has shared with IIAT member agents came from his earlier career with insurance companies and a retail agency and his ongoing tireless efforts at staying informed on current insurance market conditions. 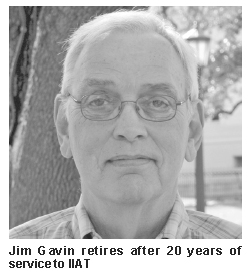 The association affectionately headlined the announcement of his retirement “IIAT congratulates Jim Gavin for extending his weekend by five days.”

For years, Gavin has appeared alongside Lee Loftis, IIAT’s director of governmental affairs, at statewide IIAT conferences. Together they tag teamed the annual Industry Preview at the Joe Vincent Management Seminar. Loftis handled the state and federal governmental issues; Gavin talked about industry trends, the market and issues agents find problematic with carriers. Before Loftis, Gavin’s Industry Preview teammate was Paul Martin, who now serves as director of academic content at The National Alliance for Insurance Education and Research.

Gavin’s insurance career started when he went to work for Chubb as a personal lines underwriter. He had been working in sales after graduating from college and was looking to do something else. His dad, Bob Gavin, who owned an insurance agency, knew of the insurer’s need and recommended his son to look into it.

Yearning to return to his family roots, Gavin joined an agency in Wichita Falls. Then, it was Allred, Thompson, Mason and Daugherty. Today, the agency is part of Higginbotham. After 20 years with the agency, Gavin sold his interest in it and sat out for about six months while he contemplated his next venture.

It was then, in 2002, that he learned of IIAT’s recent elevation of David VanDelinder to executive director from director of education, leaving a void in the organization’s education department. Martin, moved into the director of education position, and Gavin worked with him to write course material and teach classes to help train insurance agency owners and their employees. Gavin called his initial role with IIAT a really good fit with his college degree from St. Edward’s University. He carried a double major in business and education. The job came with a 20-city tour of just about every course offering of the association. “I was on the road a lot,” he said.

In 2011, Gavin was named director of insurance information services with IIAT. It was just a few years ago that IIAT shifted largely to web-based instruction. Gavin went from spending a lot of time on the road to using technology to provide services to members. “Webcasts allow us to reach a lot of people without the facility and travel costs,” he said, adding that time will tell if this efficiency is as effective as the face-to-face experience.

On the IIAT website Gavin, in his casual style welcomes questions from members. “Contact me with any technical questions and coverage stuff. I’m also here to help with your agency training needs,” says the flip side of his online portrait. Gavin is saying goodbye to fulltime employment with IIAT, but he intends to maintain relationships and provide whatever assistance is needed by IIAT or its members as others pick up Gavin’s duties.

“If you know Jim, you can probably agree that his quick wit and great sense of humor will be missed the most. … You can count on him for a laugh to lighten the mood in any room,” said Marit Peters, IIAT’s president and executive director.

IIAT’s press announcement of Gavin’s retirement included an interview with him, a preview of the webcast interview planned for Mornings with Marit on June 30. He was asked to give parting advice and make a wish for the industry’s future.

Gavin would like to see IIAT consider developing an incubation program to help independent agents get started. “It is not easy being independent,” he said, “and we have the resources to get new folks off to a good start.”

Gavin’s advice to agents is to continue to focus on relationships with their customers. Keeping up with technology is important, but building relationships is what makes agents successful, he said. “We are still selling a product that no one understands and (everyone) hopes they will never need,” he said. “Long term success depends on earning customers’ trust.”

Gavin predicted that increased use of artificial intelligence will make the insurance product even more mysterious to customers. This will challenge agents to be able to explain prices and limitations of coverage to them.

Simplifying the homeowners policy, said Gavin, would improve the image of the industry with policyholders, he said. The typical homeowners policy is 24 pages long and filled with difficult to understand terminology, Gavin said. He urges companies to make it simpler not only for the benefit of their policyholders’ understanding of the contract. He believes ridding policies of “arcane language” would reduce costly litigation defense costs.

Gavin said he expects his retirement will make him miss the people most. “I’ve been blessed to work with talented, hard-working people who enjoy each other. I’ve also developed some great relationships with our members. This has always been a ‘people’ business and walking away from that will not be easy.” Gavin is comforted by the knowledge that he may be in the background at IIAT for a little while and that conversations with Peters over the last several months will make for a smooth departure.

Gavin and his wife Sandy plan to remain in Austin in retirement. They plan to travel to the states that Gavin’s work has never taken him: Montana, the Dakotas and Wyoming.