Do you know Gigi Heffernan? Then, think Erin Keefe LeBlanc, Heffernan’s daughter, and the opposite is true, or so LeBlanc says. Their main difference is decibel level. Their love for family, friends, co-workers and community and their enthusiasm for their insurance careers and their clients are very much in common.

LeBlanc just entered her sixth consecutive one-year term as president of the Insurance Professionals of Galveston County, a small group of 11 members. LeBlanc works as an account representative and licensed agent for commercial and personal lines at the Heffernan Insurance Agency, a Galveston agency started by her grandfather, Jack Heffernan. LeBlanc’s mother is the current owner of the family business that took roots in Galveston more than 100 years ago. LeBlanc has been with the agency for 13 years, starting shortly after Hurricane Ike changed her personal career plan. 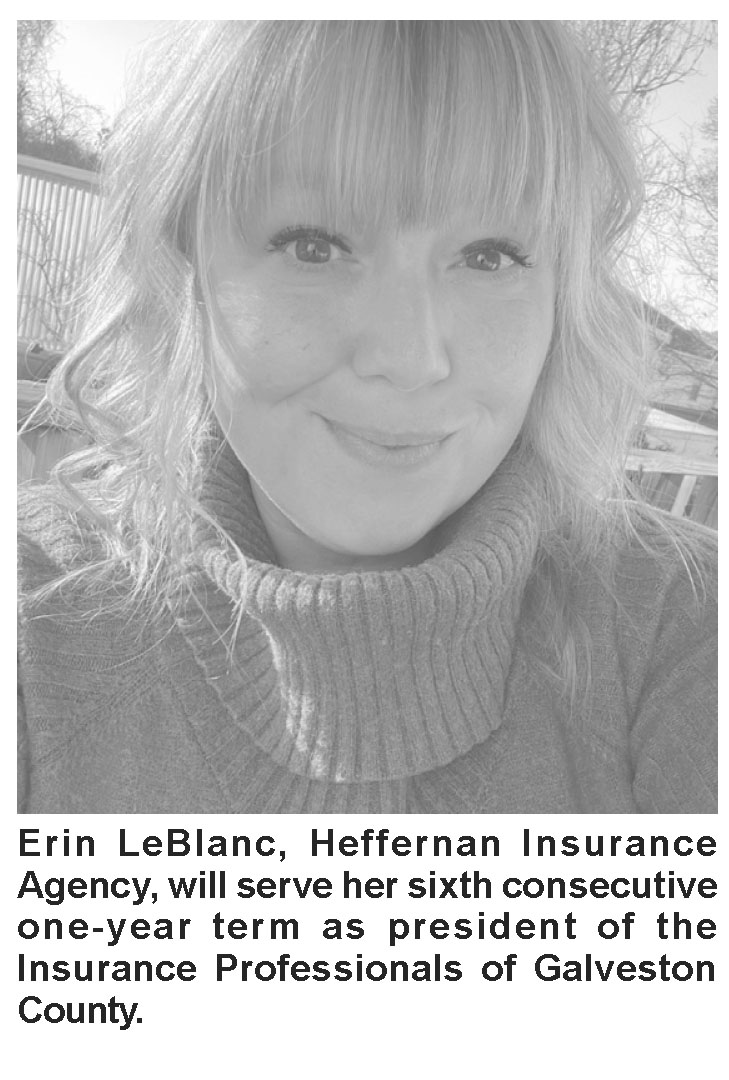 LeBlanc worked her way through college tending bar while pursuing a degree in criminal justice and child psychology at Sam Houston State University in Huntsville. After earning a B.A. in August 2008, LeBlanc almost accepted a supervisor’s position with the Texas Department of Public Safety, but changed her mind, she said, when she feared what she might do to a child abuser. Intending to go back to school to obtain a teaching certification, LeBlanc changed paths when Hurricane Ike came ashore a month later, bringing a wall of water over Galveston Island. Help was needed at the agency.

Today, LeBlanc manages the Heffernan Agency’s Johnson City book of business  in a virtual world, having closed the brick and mortar location there earlier this year.

Despite the interruption of Covid, the local association continued its community service work with enthusiasm, said LeBlanc, for the Resource and Crisis Center of Galveston and the Walk to End Alzheimer’s in the Galveston Bay area.

Traditionally, said LeBlanc, the local association adopts a family from the women’s crisis center and fulfills the family members’ needs and likes list in celebration of the center’s annual Santa for Survivors party. The pandemic, however, triggered alternate plans, said LeBlanc, with a drive-by drop off of gift cards, toys and clothes at the shelter. While the event was less personalized without a specific family benefitting, LeBlanc said the generosity of the IPOGC members was huge.

The members are currently raising pledges for the Alzheimer’s Association for the walk planned for Oct. 9. The walk is an annual commitment of the members.

With fundraising for the association falling off during the pandemic year, IPOGC skipped awarding a college scholarship in 2021, even though five scholarships were awarded in 2020. Their next fundraiser for the Barbra Burns Memorial Scholarship fund will be at the FIWT annual convention in October when IPOGC will raffle two shadow boxes that will appeal to Rangers and Astros fans. The group will raffle liquor and lottery baskets throughout the remainder of the year. Burns was a beloved member of IPOGC, said LeBlanc, and always the artistic one in the group. Burns passed away just two weeks before Heffernan took office as president of FIWT in 2014.

Members of the IPOGC “make it easy” to be president, said LeBlanc. “They are a great group to be a part of.” Still, one of her goals for this year is to find a member willing to take on the role of president next year. Active membership in the local and state associations, said LeBlanc, carries many rewards. So many friendships are created, and not just for insurance purposes, she said. LeBlanc expects every member of the Galveston local association to attend FIWT’s 77th Annual Convention in San Marcos, Oct. 21-24.

Other officers of the IPOGC are Vice President Susan Meissner; Secretary Melanie Hallett and Treasurer Gigi Heffernan, both with Heffernan Insurance Agency. Meissner, having moved to the area from east Texas, is actually new to IPOGC, said LeBlanc; Berg, who served as vice president for the last few years, passed the job over to Meissner as sort of a fellow FIWT past president gig.

As soon as reported Covid numbers are down, said LeBlanc, the association will resume its dinner meetings on the second Tuesday of the month. Currently, the meetings are at Dickinson BBQ, but the group occasionally moves around.