All set to play off a 20/20 theme of perfect vision, Sue Finke, was forced to adapt as she served a double term as president-elect of the Federation of Insurance Women of Texas. With travel curtailed since March 2020 due to the pandemic, FIWT kept statewide officeholders in place for a second year to allow Wendy Rhoden, Patterson and Associates, more time to make her rounds to the 13 local associations across the state as the 2019-20-21 president of FIWT. 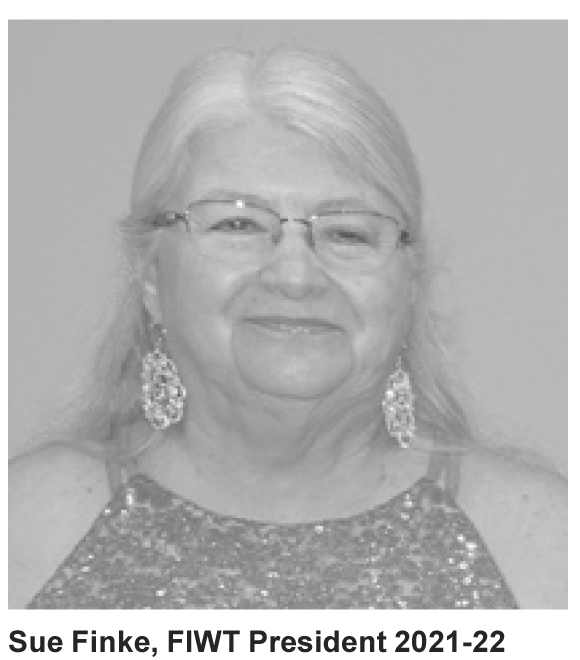 Finke, who serves as the commercial account manager at Blue Lime Insurance Group, was installed president of FIWT during the 77th annual convention, held Oct. 21-24 at the Embassy Suites San Marcos. A self-proclaimed resister to change, Finke emerged from the extended role of president-elect committed to a revised theme and a Marine-inspired motto. The theme for 2021-22, Better than Perfect Vision, and the motto, Improvise, Adapt, and Overcome, were well received by more than 120 members attending the first in-person annual conference since 2019.

Finke started her varied 51-year insurance career in 1970 the day after her high school graduation. She was interviewed and hired by the Missouri Audit Bureau which ultimately became a part of the Insurance Services Office (ISO). Her initial attraction to the position was that being a typist was not required. She remained with the agency for three years.

In 1973, she moved to the private sector and worked for a retail agency, then a wholesale agency that eventually became a part of Arthur J. Gallagher. Still in Missouri, Finke joined a retail agency owned by her then future father-in-law, where she remained for 10 years as a personal lines account manager. While Finke didn’t deliberately pursue insurance as a career, she said she acclimated to it early, as it fit well with her innate interests and skills in organization, logic and math.

In 1988, Finke’s husband William took a job in San Antonio, and Finke was hired by McCaleb and Blakey as office manager, personal lines account manager and IT. By then, widespread use of the personal computer forced her to adapt by acquiring the typing skills, which she had proudly resisted earlier in her career.

In 1995, Catto and Catto acquired McCaleb and Blakey, and Finke continued handling personal lines, until 1997, when she moved over to commercial accounts. In 2018, Finke became account manager with Blue Lime Insurance Group, a niche agency specializing in HOA insurance policies for communities and condo associations. Blue Lime is a sister company to Spectrum Association Management, which is headquartered in League City.

Over the years, Finke has earned several professional designations: CPIW, CIC, ACSR, and CIPT. She earned the CPIW first, more than 30 years ago when she was active with the local chapter of the National Association of Insurance Women in the St. Louis, Missouri, area.

In 1995, Finke was honored by the Independent Insurance Agents of Texas with the first of what has become an annual award for a customer service representative.

Also in 1995, Finke was recruited by Deni Townsend, Billy Greaves Insurance Agency, to become a member of FIWT by joining the Insurance Women of San Antonio. She recalls serving in every office except treasurer of the local association, and more than once as local president before she moved to committee service and leadership in the state association.

Finke found a kindred spirit in IWSA, she said. Sally Walsh Downs, a founder and second president of FIWT (1945-46), was also a Missouri transplant in San Antonio. In addition to their careers in insurance, they shared a love for painting, a hobby Finke has put on hold since she works nearly 80 hours a week between her work duties and FIWT service.

“Be involved with FIWT and meet like-minded people,” Finke said is her advice to newcomers to the industry. “Think of insurance as a career, not just a job,” she said. Insurance is more than a nine-to-five job, she said. “You will love what you do, especially if you like math and logic,” she added, noting that insurance and insurance regulations are “not always logical.”

In her installation speech, Finke laid claim to being the oldest person installed president of the state association. At 69, she has a wealth of experience to share with the members. (Finke was careful to point out that she is not the oldest member of FIWT and that several past presidents are now older than she is.) She has improvised, adapted and overcome many times in her insurance career, and she pointed out how much FIWT had to do the same in the past year and a half and will continue to do so in the foreseeable future.

FIWT changed and refiled its continuing education credit classes with the Texas Department of Insurance, so the association could transition from classroom learning to webinars. Last year’s 76th Annual Conference featured a virtual trade show. Both adaptations helped to continue the revenue needed to keep FIWT going. She invited members to submit new class topics, fundraising ideas and community service projects, so FIWT continues to contribute career development to members and extended service to their communities.

The convention itself had a few changes in its traditional schedule to accommodate some budget concerns. One change had nothing to do with budget but proved popular with exhibitors. Rather than have cards for exhibitors to punch or initial throughout the trade show, convention attendees had to capture information from each booth to become eligible for a door prize. Every item was a conversation starter: What is the exhibitor’s primary line of business? Name the booth workers. Has the exhibitor been to a previous FIWT convention?

During her address to the members in the post-convention board meeting on Sunday morning, Finke introduced a new service of FIWT to help members stay connected in trying times. The Member Care Team, she said, will help members and their communities when disasters strike. She named Cindy Condron, a retired member of Metroplex Insurance Professionals, to head the team on a state level, and encouraged the local associations to do the same, so together the team can put a disaster plan in place. Finke recommended that these teams help out with meals, gift cards, places to stay for the night when grave illness, accidents, loss of a loved one, a house fire, hurricane, wildfire or flood puts others in need of help and compassion. Rather than attach the duties to the local community service committees, Finke suggested that the local associations tap the chaplain or another member to lead the local Member Care Team.

Finke’s chosen community service for her term is St. Jude Children’s Research Hospital in Memphis, Tennessee. She challenged local associations and the members at large to set up fundraising to contribute to the facility that provides compassionate support for critically ill children and their families at no cost to them. She said St. Jude provides living quarters for family members and schooling or tutors for sick children as well as their siblings. Susan Meisner, HighPoint Insurance Group and member of Insurance Professionals of Galveston, was named FIWT chairwoman of Community Service.

Kristie Gray continues in the role of executive director for the state association.