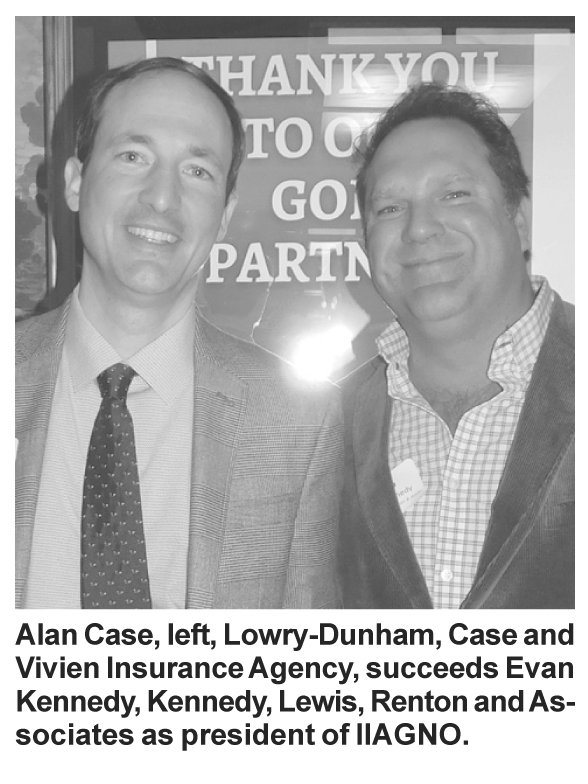 Case, a 17-year veteran of the insurance industry, got his start with LAMMICO as a medical malpractice underwriter after getting his business management degree from Louisiana State University.

He was with LAMMICO for nearly six years before joining his family’s agency that was founded in 1901 on the northshore in Slidell. He is currently a vice president/commercial risk consultant.

Case has been active with IIAGNO since 2017 when Robby Moss, Hartwig Moss Insurance Agency, asked him to serve on the board of directors. “I told Robby that I guess I should be a member before I start serving on the board,” Case said in his installation remarks.

His family has been active with the Big I for years, both his mother Brenda Case and grandfather William T. Lowry served as presidents of the Independent Insurance Agents and Brokers of Louisiana, 2020-21 and 1974-75 respectively.

He has the CIC (Certified Insurance Counselor) and AAI (Accredited Advisor in Insurance) designations.

During his term as president, Case simply wants to get back to meeting in person. “I don’t have any real big plans. Coming off of the Covid-19 shut downs, it is not such a small task to just get back to meeting in person,” Case said. To that end, IIAGNO is set to hold a barbeque social at Central City BBQ on March 31; the Alvin Shepherd Big I Charity Golf Classic on April 8. (The charity which will receive the proceeds from the golf tournament has not been decided), and a Town Hall meeting on Aug. 25.

IIAGNO will also hold a Company Appreciation Event on Oct. 12 and the Past Presidents’ Christmas luncheon on Dec. 9.

Case believes that the benefits to being a member of the Big I are the opportunity to network with other members, the opportunity to get continuing education hours, and the fact that IIABL keeps members updated on the goings on in Baton Rouge with both the Louisiana Department of Insurance and the state legislature.

Outside of insurance, Case has served on the advisory board of the Old Towne Slidell Main Street and is active with the Rotary Club of New Orleans.

Case believes the biggest challenge facing independent agents in Louisiana today is the access to markets. “The legal climate in Louisiana makes it harder for the casualty side of the business, and the last two hurricane seasons make it hard on the property markets,” Case said.