Stonetrust recently moved into its new office on the eighth floor of the office building at 5615 Corporate Boulevard in Baton Rouge. Stonetrust started the renovations on the 8th floor in early March before the start of the shut-downs due to COVID-19.

The planning for the new office was started last year with the vision of getting employees on the same floor to keep them from having to go upstairs or downstairs to meet with colleagues from other departments. Before the move, employees were housed on the fifth and seventh floors of the building. Now all employees are housed on the eighth floor with the exception of IT which is on the first floor, but IT personnel mainly work remotely.

Some of the adjustments that had to be made after the COVID-19 shut-downs occurred and employees were allowed back into the office were that Stonetrust added hand sanitizer stations throughout the office floor, the desks in the cubicles are set so that employee’s backs are to each other and not facing each other, and only half of the employees report to the office at one time, Natalie Jones, Stonetrust’s Human Resource director who headed up the project, told the Reporter.

Some of the green technology that Stonetrust added to the new office space is LED lighting throughout the office that is automated so that if there is not movement in the area for a period of time the lights turn off automatically.

The lobby area originally had more seating than it currently does with a kitchen area that also had seating so that employees could collaborate with each other during lunch. “Coronavirus changed that,” Jones said. “The lobby area is still set up to allow open communications but also allows employees to social distance while doing it,” she added.

Jones told the Reporter that the air conditioning system has multiple zones; every two offices share one unit so that one system does not cool the whole floor. 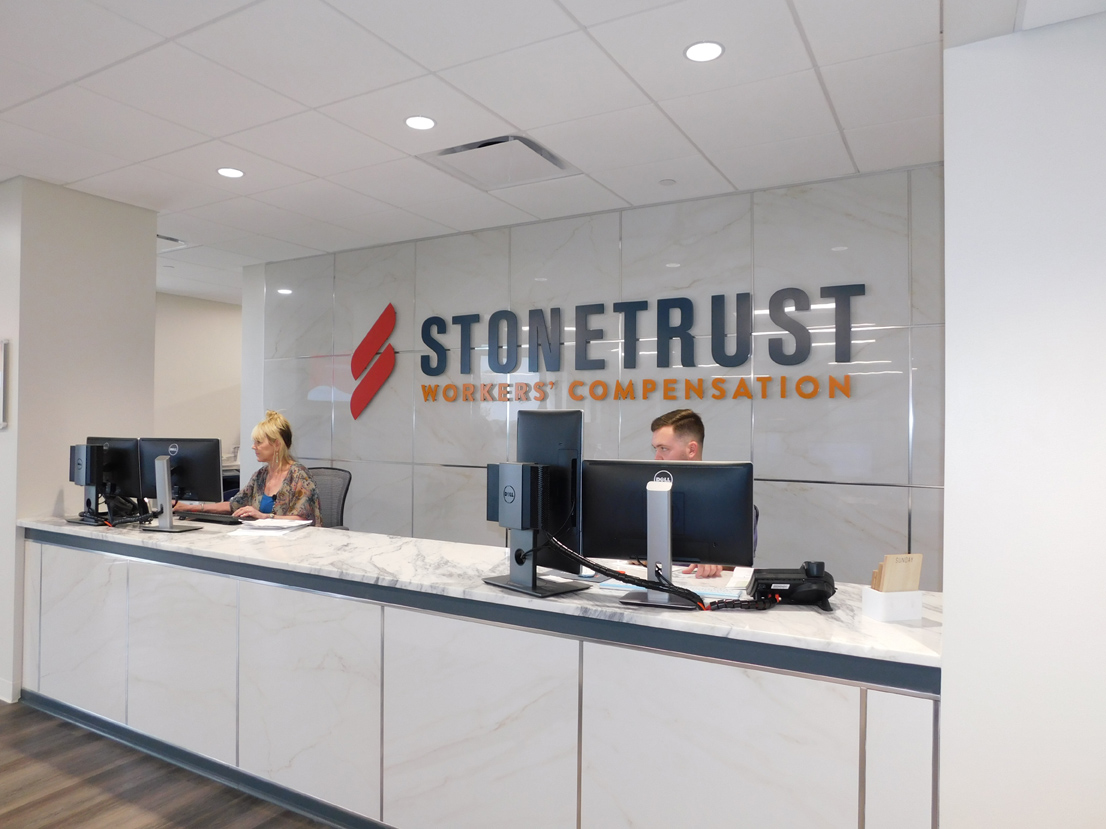 Jones told the Reporter that one of the biggest obstacles to the renovation was getting the three quad display televisions and the tables for the conference room and board room into the office. “None of them could be brought up in the elevator,” Jones said. A window had to be taken out of the new office space and the five pieces had to be lifted by a crane and maneuvered through the window. “The only setback was the window was dropped when the contractor was putting it back in,” Jones said. “It shattered when it fell eight floors and hit the ground,” Jones added.