With both the 2020 midyear expo and annual convention moved to the internet due to COVID-19 restrictions, the Federation of Insurance Women of Texas and its local associations looked back on a year that hardly happened and kept lots in place for the coming year. The recap came during the business meeting of the 76th Annual Convention on Oct. 24. 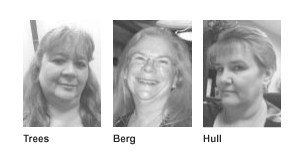 The state association officially marked 2020 as a “skip year” for FIWT’s Certified Insurance Professional of Texas designation, with a one-year deferment of course completion, certification and recertification deadlines. The members also agreed to hold all officers over for a second year for their term, with President Wendy Rhoden and Corresponding Secretary Janet Dawson vowing to complete their visits to local associations throughout the coming year. The animal shelter project will remain the association’s statewide community service effort.

The only election held for state office was won by Debbie Trees, Higginbotham Insurance Agency, unanimously. Trees was elected to the office of recording secretary, a position temporarily filled by Shanna Sutton, Specialty Insurance Managers, when Vanessa Torres stepped down from elected office.

The election of Trees was celebrated in Higginbotham’s conference room where she, members of the IACC and three past presidents assembled for the web-based FIWT meeting. Joining her there were FIWT past Presidents JoAnna Ringel, 2012-13; Conya Harris, 2011-12, and Sharon Foster, 2015-16.

Trees is a member of the Insurance Associates of Corpus Christi, where she served as president four times. She is a large commercial account manager at Higginbotham, where she has worked for 16 years. Trees holds the ACSR, CIC, CISR designations and is currently working on the CIPT designation. Previously, Trees chaired several FIWT committees, including Community Service, Minutes, Insurance, Scholarship, Convention Liaison and most recently Long Range Planning.

FIWT’s online convention offered four hours of continuing education classes, taught by Eric Johnson, ComedyCE.com, spread across four days beginning Oct. 20, and more than a month of a virtual exhibit hall where members and nonmembers were invited to click on exhibitor links for videos of information normally found in vendors’ face-to-face booths. Most virtual booths featured opportunities for door prizes announced post-convention and hyperlinks to the exhibitors’ websites for additional information. Executive Director Kristie Gray commended Johnson for developing the convention event website along with conducting the C.E. classes. Gray also said that the post-convention survey of exhibitors merited 100 percent satisfaction. “All of them said they would do it again,” said Gray.

FIWT Vice President Tanya Wyatt, Barnard Insurance Group, announced the North Texas Insurance Professionals as the winner of the annual education contest and recognized the Insurance Women of San Antonio for earning the membership award by acquiring 11 new members despite the year’s difficulties of meeting in person.

The 2021 FIWT Midyear Leadership and Education Expo will be co-hosted by the Dallas Association of Insurance Professionals and the Harlingen Insurance Professionals as FIWT returns to in-person events. It is slated for April 23-24 at the Estancia del Norte Hotel in San Antonio. Expected fund raising events at the midyear meeting include a bunco tournament and prize raffle.

Glass plaques will wait until April for presentation, as the Federation of Insurance Women of Texas bestowed its annual awards on two longtime members for leadership and community service. Past President Cindy Jordan, retired, announced the winners during the virtual post-convention business meeting of the FIWT board of directors on Oct. 24.

JimmieGale Berg was honored with the leadership award. Berg has been active with FIWT since 1984 when she started as an entry level customer service representative for an independent agency. Later, she worked two years on the company side as a personal lines underwriter, then returned to the retail side of the business. In 2018, she moved to the wholesale side, joining Tryton Insurance Group, which was acquired by RT Specialty in 2019. Berg is a senior underwriter manager with RT Specialty.

Berg served in every elected leadership role with the Insurance Professionals of Galveston, then completed a five-year commitment on the FIWT board of directors, serving as president of the state association in 2004-05. She holds the CIPT designation, having completed all six parts in the inaugural class. She is currently training as an instructor for the CIPT program.

In presenting the award, Jordan said Berg is one who is “always willing to listen, always positive, and content to serve without the spotlight.” One of Berg’s most admirable leadership traits, said Jordan, is that she helps others lead.

Lisa Hull, Robert Nelson Insurance Agency, currently serves as president-elect of the Metroplex Insurance Professionals. She has been a member of FIWT since 2001.

Jordan noted that Hull’s service to the community has been a constant for 30-plus years. She has stepped up to collect donations for various local charities, held birthday parties at animal shelters, placed flags on graves of veterans, and generally makes the world a better place. Hull missed the virtual announcement of her being chosen for the award, as she was her mother’s weekend caregiver.

Both awards merited the winners $250, which FIWT Executive Director Kristie Gray put in the mail after the online meeting, reserving the glass plaques for formal presentation at the in-person midyear summit in April. The leadership award was sponsored by Litchfield Special Risks; Metroplex Insurance Professionals sponsored the community service award.