Drew G. Brown, co-president and chief operating officer of TexCap Insurance, became president of the Independent Insurance Agents of Dallas during a Zoom meeting and installation ceremony on Aug. 19. From the outset, Brown has found virtue in the virtual. 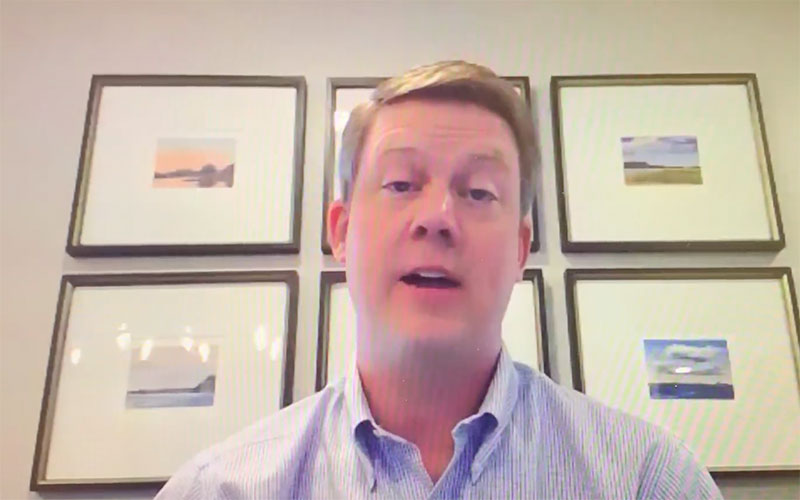 With fewer in-person activities to plan and coordinate, Brown seized what he considered a “window” of time to strategically plan the future of IIAD. “With not as much happening face-to-face as is typical of our association, the board was challenged to do something different,” he said.

Expecting that by spring the association will return to in-person activities, Brown is using his first six months in office to “focus on strengthening the foundation of the association to be relevant for the decade ahead.” To that end, he asked the board to lead four task forces devoted to oversight, technology, membership and engagement.

The oversight task force, said Brown, is charged with reviewing all governance and accountability documents and processes to make certain the association is properly aligned.

Since technology has become so important in maintaining association connections since March, the tech task force will make sure we are using the right systems and platforms. Beyond that, said Brown, this task force will look toward using data analytics to help the IIAD leadership and staff make good decisions for the future. “We are also looking at other technologies to incorporate live streaming when that’s appropriate,” he said.

Maintaining relevance to all these diverse members becomes a real mission for the association, said Brown. “We must make sure we are offering things of value, how they perceive value,” he said.

Hence, the engagement task force members are putting their heads together to find ways to encourage more attendance at association activities. Brown hopes to go deeper into each member agency to find not only more employees there who will attend activities, but will do so with greater frequency.

Brown said IIAD’s Jim Millerman Annual Convention is planned as a virtual event on Nov. 5. As soon as the schedule of events for the day is finalized, details will be available on the association’s website. Meanwhile, monthly C.E. and other guest speakers continue to be offered through GoToWebinar. September’s meeting featured Tai Williams, Texas Mutual, who spoke on workers’ comp issues, and Lee Loftis, IIAT, who presented the state association’s plans for the 2021 legislative session. All IIAD webinar meetings happen on the third Wednesday of the month, starting at 9 a.m.

As of now, the annual Account Manager Appreciation Luncheon is planned as an in-person event for Oct. 21 at the Royal Oaks Country Club. It will be preceded by a two-hour C.E. presented by Enya He of Lloyd’s and feature the luncheon speaker Missy Payne, author of Cheer 4 Your Life.

Brown’s tenure with IIAD began the day he joined TexCap Insurance in July 2010, since the agency has been an IIAD and IIAT member since the agency started in 2005 as a bank affiliated agency, then remained active when the current owners bought the agency from Texas Capital Bank in 2007.

In 2017, Brown was elected to the board of IIAD, then rose to his current office after serving as secretary/treasurer in 2018 and president-elect in 2019. His father, Gaylon Brown, CEO and managing partner of TexCap, is currently the presidentelect of the Independent Insurance Agents of Texas and served as president of IIAD for the 1993-1994 term. Drew Brown is the fifth person affiliated with TexCap to serve as president of IIAD.

Drew Brown holds the CIC designation. He is a 2009 graduate of McCombs School of Business at the University of Texas. He holds a double major degree in business honors and finance. After graduation, Brown worked for a corporate financial consulting firm, which he said gave him tremendous experience in data and financial analysis, a major skill set he was able to bring to TexCap when he joined the agency in 2010.

In 2012, Brown became a partner of TexCap, then in January 2019, he was named to his current position of co-president and chief operating officer. Brown said he is neither 100 percent producer/sales nor 100 percent analytics for the agency, but a combination of both. As COO, he oversees the operations team and the day-to-day workings of the agency and advises business insurance clientele.

Brown looks forward to the part of his term when in-person activities resume. The biggest value of IIAD, he said, is it provides a place for insurance relationships to happen. “Everything we do is to foster relationships,” he said, noting that the COVID challenge kept the members from being together physically.

Still, the traditional role of IIAD in community activities remains strong, he said. The association’s financial support and big send off for a Make-A-Wish honoree will happen in February. IIAD’s $40,000 annual scholarships for upperclassmen enrolled in the Risk Management and Insurance program at UT-Dallas continues, said Brown. Each year, the association chooses two rising juniors in the program for $10,000 awards, then continues the award for their senior year provided they remain eligible. Brown said IIAD’s support for this award is among the largest scholarship programs of the Naveen Jindal School of Management at the university.

Brown is on the advisory board of ELITexas, and he serves as deacon of Park Cities Baptist Church.

Of the new president, Tammy Land, executive director of IIAD, said, “The association is in good hands with Drew Brown. He is an experienced diplomat and leader with a fresh perspective.”

Bruce Sams, Champion Insurance, was tapped by Brown to serve as ex officio member of the board. Sams is a past president of IIAD and serves as advisor to the president.